Marui Shokuhin Mie Kojo, an OEM manufacturer of powdered soups and mentsuyu, secures a halal certificate for its powder line.
It’s a step in meeting the needs of the rising exports of foodstuffs from Japan to the Islamic market, even in the Covid-19 pandemic.

The certification acquired by Marui Shokuhin Mie Kojo (有限会社 丸井食品三重工場) is the halal certificate from Nippon Asia Halal Association (NAHA). Japanese noodles such as ramen, udon and soba are becoming more sought after in the Islamic market. As such, it expected to enhance exports to Southeast Asia, including Indonesia and Malaysia.

The company plans to develop three types of soup: soy sauce, miso and creamy, after tweaking the taste through extensive employee training and Muslim test-tasting sessions. Along with ramen and udon/soba soup, they also produce yakisoba and grilled meat (yakiniku) sauce, thus developing the liquid line as well.

Muslims make up a quarter of the world’s population—currently 1.9 billion people. With the expected increase in the number of Muslims, more Japanese local authorities are encouraging companies to enter the Islamic market.
Mie Prefecture is one of the local authorities stepping up its efforts for exports to the Islamic market. Marui Shokuhin Mie Kojo is also utilizing the prefecture’s subsidy program to acquire this certification.
The subsidies reduce the burden on companies and enable them to offer their products to consumers at a lower price. It helps to ensure that outstanding Japanese products continue to penetrate the growing Islamic market.

The company itself was certified as a HACCP accredited facility and kept working on allergy (gluten-free, etc.) and vegan initiatives. HACCP is for quality control, while allergy and vegan initiatives seen as highly relevant to the Halal certification in terms of the use of additives and ingredients of animal origin.
They consulted with the Japan Halal Business Association (JHBA) to obtain the halal certification. Together with Kobayashi Seimen’s cooperation, they created a system that enables exporting noodles and soup in one package. 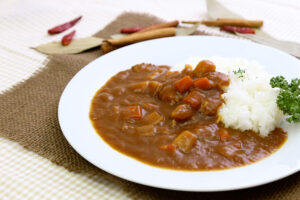 Previous post More halal curry and spices to be made, House Foods

Next post Is NATTO the Saviour of Earth’s Water Crisis?